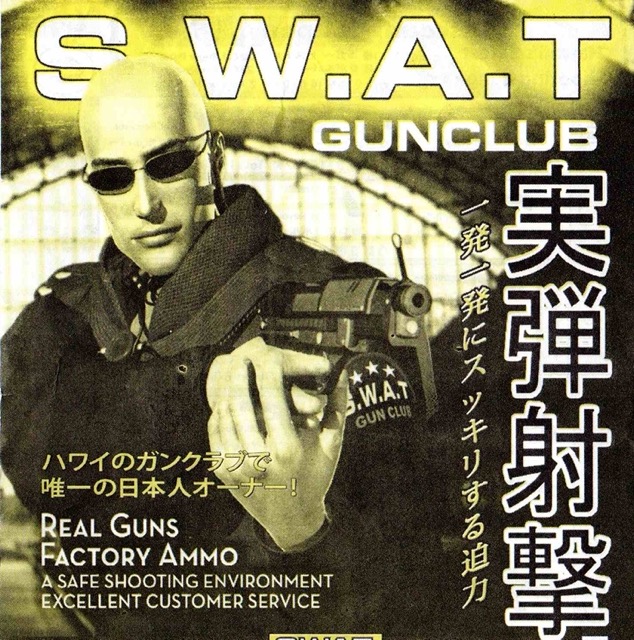 [Guest post by Andrew]: While walking along Waikiki Beach, I was struck by the large numbers of people carrying flyers advertising indoor shooting ranges. The predominant language in all of these flyers was Japanese (see image for a representative sample). The people passing out flyers were clearly profiling - aiming for Japanese-looking tourists, and generally avoiding white tourists. When I made the mistake of expressing the slightest bit of curiosity, I was subjected to a rapid fire sales pitch in broken Japanese. I forget the exact phrasing of the pitch, but it more or less corresponded to the copy on the flyer. To provide some idea of the sales pitch: “SHOOT WITH LIVE AMMUNITION: FEEL THE REFRESHING POWER OF EACH SHOT” and, even more interesting, “The only Hawaii Gun Club with a Japanese owner.” The back of the flyer lists the various “courses” that one can select. The cheapest option ($25) offers 32 shots with a combination of small caliber (22) pistol, rifle, and revolver. The VIP ($95) and SWAT ($115) options include higher caliber weapons (12 gauge shotgun, 44 Magnum) and assault weapons (M-16, AK-47, H&K USC, etc.)

The verbal sales pitches often had a barely veiled sexual subtext: e.g. “be a real man, and go upstairs and fire a few rounds” or “Haven’t you ever fired a gun before? You’ll never know what it’s like until you’ve tried it.” The gun club advertisements emphasis on the “reality” of firing “real” weapons with “real” ammunition seems like an overcompensation for the essential artificiality of walking off the Waikiki beach into a supremely artificial and controlled shooting range environment in order to get a taste of the “real” experience of firing assault weapons. There also seems to be a strange historical irony at work - more than fifty years after Pearl Harbor, visitors from a quasi-demilitarized Japan are being encouraged to pick up assault weapons and release their frustration and stress in a safe and friendly tourist environment. I suppose one way to read the Waikiki gun clubs is that they are in a way, the most honest and authentic elements in the Waikiki bubble - the closet references to the violent history of American annexation and military occupation of Hawaiʻi. While the hotels and shopping malls of Waikiki all maintain an atmosphere of carefully composed tranquility and paradise, the gun club, in all its awkward display - might be the closest thing to reality.