On Sunday, December 9, my friend Rosemary and I decided to go to a place neither of us had been before: a national park located entirely within the boundaries of Mexico City called Desierto de los Leones. According to Lonely Planet, there are hourly buses leaving from Viveros Metro station, in front of the 7-Eleven, which take you past Santa Rosa Xochiac and on to the old convent in the park:

Most visitors arrive in a car, but green camiones head to the ex-convento hourly from metro Viveros (in front of the 7-Eleven), or from Paradero las Palmas in San Ángel, on Saturday and Sunday from 8am to 3:30pm. Monday to Friday departures are few… and stop short in a mountain town called Santa Rosa from where you need to take a taxi.

Lonely Planet turned out to be more or less correct: here is a picture of the minibus (seats about 40 people) we got on, where you can see the sign that says Santa Rosa as the destination, via Avenida Toluca, with a final bonus destination of “Desierto”! 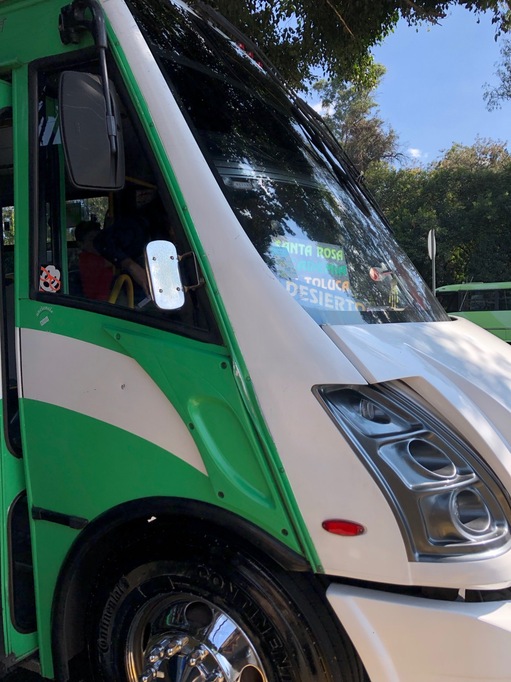 It’s unclear whether the buses actually leave hourly or if it’s “whenever they feel like it”, but in any case we started moving at 12:22. The cost of the ride was 25 pesos, and the ride itself was super bumpy, going up some windy roads filled with speed bumps. An hour later we had gotten past most of Santa Rosa, and 16 minutes after that we had arrived at the parking lot by the old convent.

The main attraction at the park seems to be the convent, which cost MXN 16 to enter and apparently includes a tunnel of some sort. We chose not to go in, and instead headed to the duck pond/waterfall area, which you can reach by walking down the stairs past the paid bathrooms (6 pesos) and a bunch of vendors mostly selling food. (We had some amazing quesadillas at one place by the parking area… Fun fact, in Mexico City quesadillas don’t come with cheese by default! They’re more like flattened tacos.) 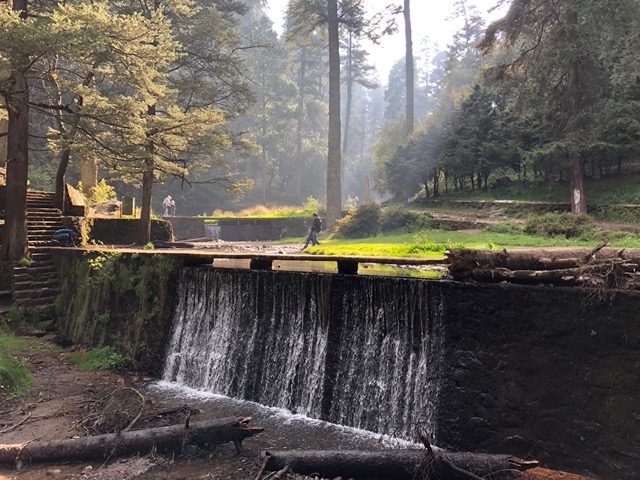 After a fun afternoon at the park, we decided to head back to the city. This was where the trouble began. Supposedly the last bus back to Viveros Metro left at 6, so we thought we’d have plenty of time to catch the second to last bus by getting to parking/vendor area at 4:40pm. After over an hour there still was no sign of any bus. As it turns out, apparently the Santa Rosa buses will sometimes just stop at Santa Rosa if there are no passengers to drop off, leaving everyone waiting at Desierto stranded until a bus eventually arrives. The cook at one of the restaurants came out and told us that sometimes large groups of people would be stuck waiting for hours before a bus would come. “It’s not right,” he said, and said we should head over to the police station to ask them to call down to Santa Rosa and make them send a bus up. (There’s no cell phone reception in that area of the park.)

The group (now 20+ people) had a different idea, though. “Let’s just walk to Cuajimalpa,” some people said. “It’s a reasonable walk, and it’s all downhill, and there will be transportation there!”

This reasonable walk ended up being a 45+ minute post-sunset hike through the dark forest, with downed trees blocking the path at several points along the way. Eventually the trail joined up with the road leading to a little town called La Venta, near the outer edge of Cuajimalpa. The path we took isn’t on google maps, though it’s a nice wide trail (located between the car road on the left and the green trail on the right that you can see on the google map), and I’m sure it would have been lovely during the day. 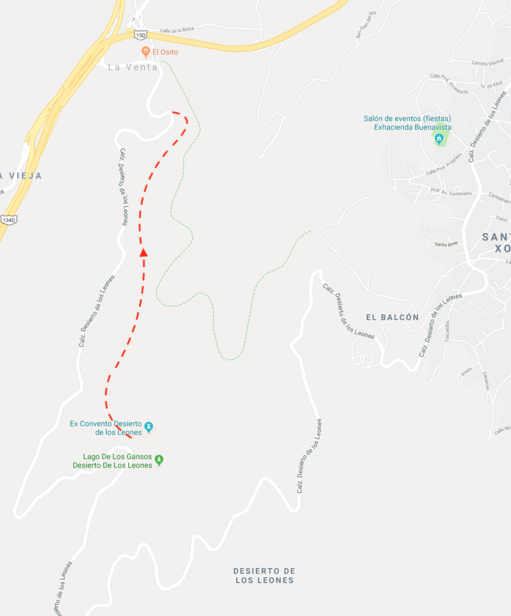 It was almost 7 at this point, so the last pesero back into town had already left, and an uber ride would have cost MXN 300 and taken over 15 minutes to even get to where we were waiting, so we ended up walking over to the highway and catching a bus from there. For 8 pesos, we couldn’t really complain about the windows being made of saran wrap. 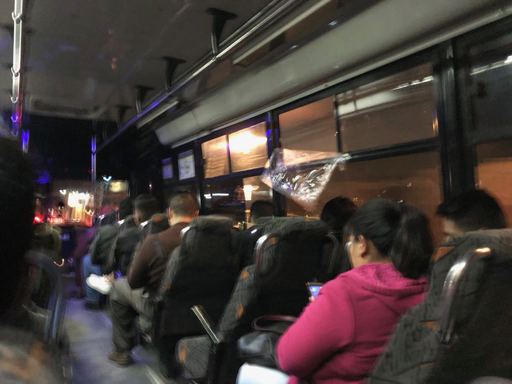 Half an hour later we were deposited at Tacubaya Metro station, and as a bonus, we didn’t get robbed at any point along the way! Despite taking four hours to get home… it was actually kind of fun?