One of the things that always bothers me about mainland China are the weird usages of certain words. Take 文化 ‘culture’, for instance. If someone here says that someone “has culture” (有文化), what they really mean is that they’ve been educated. Having taken, e.g., Anthro CIV my freshman year, this is totally bizarre to me. Everyone has culture (note that the Chinese word 文化 has the anthropological meaning as well); just because it’s different doesn’t mean it’s not as good as yours. But that seems to be exactly the implication here: if you haven’t received a proper education in Chinese, you don’t really have culture.

I noticed a similar thing with 识字 ‘literate’ when my language consultant said that his father was illiterate (不识字). I was confused—didn’t his father read Tibetan? But what he meant was that his father couldn’t read Chinese characters.

Then there are all sorts of weird naming conventions, like “Culture Road” 文化路, “Liberation Road” 解放路, “Unity Road” 团结路, and things like “People’s Road” (人民路) and “People’s Park” (人民公园). I guess they all show how cultured, liberated, and unified the “people” are now.

But perhaps the most bizarre is 文明 ‘civilized’, which you see everywhere in mainland China. There’s apparently a great push there for people to be more “civilized”. At urinals there are signs that say 向前一小步 文明一大步 “Step a little more forward, be a lot more civilized”. I can’t decide if this is insulting (i.e., you’re so backwards that you don’t even know how to use a urinal) or false security (look at how civilized I am, I don’t drip all over the floor when I pee).

Pictured above is a “Safe, Civilized Building”. In case there’s any doubt, it’s been posted four times. 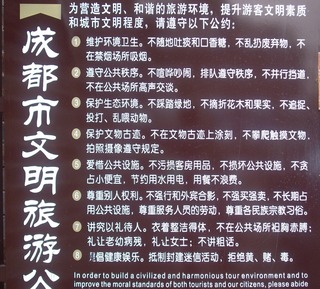 Here’s another example, an effort to have tourism be more civilized. My favorite part is where it tells you, “Don’t force foreign tourists to take photos.” Here’s the complete English translation (copied verbatim from the sign) for your enjoyment:

In order to build a civilized and harmonious tour environment and to improve the moral standards of both tourists and our citizens, please abide the following rules.